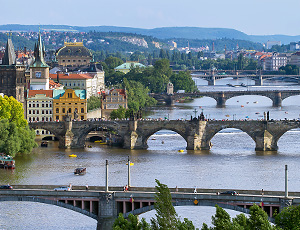 The Jewish cemetery in Zizkov is and historic site of great significance. It is the resting place for some 40 000 persons, including a number of prominent rabbis and scholars. The most visited grave is that of the Chief Rabbi of Prague Ezkiel Landau (1713-1793), whose tombstone was fully restored in 1993 (to mark the anniversary of his death), together with those belonging to other members of his family.

The New Jewish cemetery in Olsany

The New Jewish cemetery in Olsany si located between Jana Zelivskeho and Pod Kaplickou streets. The cemetery was originaly opened in 1890, after the Old Jewish cemetery in street nowaday called Fibichova had been shut down. Its area and number of tombstones makes it the biggest jewish cemetery in Czech republic. In 1958 the cemetery became a National Monument. The entrance to the cemetery is from the street with quite significant name, Israelish street. The tombstone of Prague jewish writer Franz Kafka is the most visited spot of the cemetery.

The park on the hill of Vitkov covers the area of 14,93 ha. There is a beautiful view of the city. Eye-catching hill is 270 above the sea level and is located right behind eastern part of city centre. The most significant thing on this hill is specially Military Museum, located in historical buildings of Monument of National liberation and Historical Military foundation of Czech Army. Important battle took place in Vitkov on July 14, 1420 between Hussites and Crusaders. This battle was fundamental for another progress of hussite wars. Hussites and Jan Zizka broke through huge predomination and motivated their supporters. Commemorative board is here to remind this battle. In 1868 revivalists brought on of the grounding stones of National theatre from Vitkov. There is a statue of Jan Zizka from Trocnov riding his horse on the terrace in front of the western part of the building.

This hill between Olsanska and Jeseniova street got its name Parukarka after vinery and farm manor, which bought Josef Hrabánek in 1804. Josef Hrabanek was originaly wig man. Beautiful park is also called Hill of the Saint cross. There is an unusual view on the city centre from Vinohrady to Petrin and Hradcany, but you can also sight Monument and Zizka´s statue on Vitkov. Nice 1 km long path through chine is diveded into walker´s and cyclist´s parts.

The Church of St. Procopius

Architectural dominant of the whole of Prague's Zizkov is undoubtedly neo-gothic church of St. Procopius at Sladkovského Square. The foundation stone of this church was laid by Cardinal Schönborn Francis on October 30, 1898 to commemorate the 20th anniversary of the reign of Emperor Franz Joseph Ist. Therefore, in his early years was also called "jubilee" church.

The Bethlehem Chapel in Zizkov

In the house yard of number 216/4 in Prokop Street was built in 1914 by architect Bohumil Králíček Bethlehem Chapel. Late Art Nouveau building with a remarkable cubist morphology was consecrated in 1914. In the chapel was held in 1920, the first service of the newly established Czechoslovak Hussite Church.